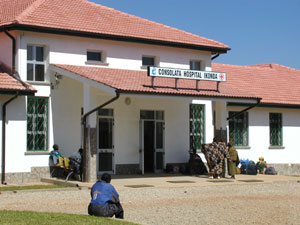 The Consolata Hospital in Ikonda began its Care and Treatment Centre for HIV patients in December 2004. In two years, it has managed to register, counsel, test and begin treating 1,700 HIV+ patients. This is an outstanding achievement in a district where AIDS prevalence is thought to be as high as 20%.

Ikonda started a Prevention of Mother to Child Transmission program (PMTCT) in 2004 with educational outreach and sensitization to 32 villages with Niverapine provision to all HIV+ pregnant women beginning in late 2005. Training in PMTCT methods was given to all nurses working in the maternity ward and implementation was quick and effective.

Voluntary Counselling and Testing (VCT) services at Ikonda Consolata began officially in 2002 and were integrated into the work of the CTC in December 2004. The provision of CD4 testing and anti-retroviral drugs at the CTC led a a rapid increase in demand for VCT with easy internal referrals from other medical departments.

Ikonda also offers HIV-AIDS Home Based Care, with 4 workers concentrating on 4 villages. Their care plan has these workers doing at least two home visits per month.